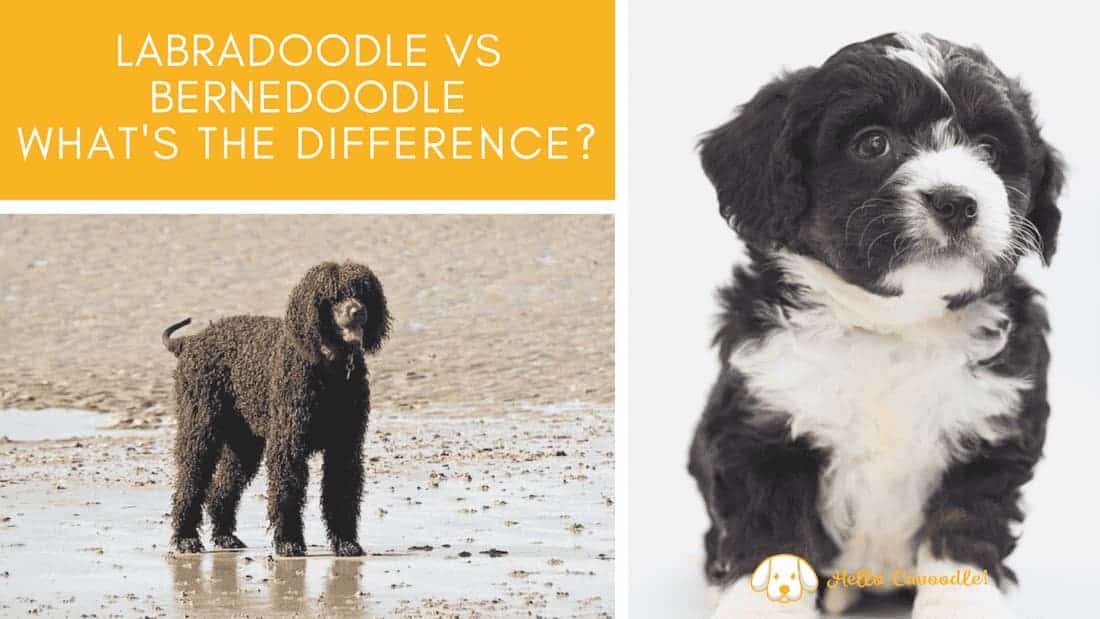 Breeders like to mix other dog breeds with the Poodle to create a low-shedding, intelligent dog that makes a great companion for allergy sufferers. These hybrid dogs combine the names of two dogs to indicate a new dog breed.

The strong and gentle Bernedoodle is a hybrid breed using the Poodle and Bernese Mountain Dog. There are several similarities yet some notable differences between a Bernedoodle and a Labradoodle. The following information will help the prospective dog owner decide on which of these two Doodle dogs is the best for them.

When crossbreeding dogs, genetics will play an important role in color, size, behavior, and health. A little research will help prospective dog owners choose a breed that fits into their lifestyle and family dynamics. All Doodles are bred using the intelligent, non-shedding, hypoallergenic Poodle. The very first Doodle breed, a Labradoodle dog, was created in 1955 using the Labrador Retriever.

However, it wasn’t until 1989 that they would grow in popularity. Australian breeders successfully developed the Labradoodle and advertised them on a TV station in Melbourne. Since the Lab is a long-haired shedder, it took some practice to develop truly hypoallergenic ones, but today, a shedding Australian Labradoodle is rare.

The Bernedoodle’s origin is debatable, but most say the dog breed was created intentionally in 2003 by SwissRidge Kennels. They crossed a Standard Poodle with a Bernese Dog, a large Sennenhud-type dog from the Swiss Alps, and bred from crosses of Mastiffs and other guard dogs to be farmhands and herding dogs. Today, the Bernedoodle is a standard breed.

Eye disease and hip dysplasia are common disorders in both the Bernedoodle and Labradoodle. Bernedoodles are also prone to elbow dysplasia and skin conditions. Labradoodles may have blood disorders. Due to these health issues, health screenings and proper breeding practices can prevent these conditions from being passed on.

Most dog lovers know the Bernedoodle as a huge, cuddly teddy bear. Indeed, the Bernedoodle can get quite large standing 23 to 29 ins and weighing up to 90 lbs. These dogs will need a large backyard or room to roam safely. But dog owners with smaller living spaces can enjoy owning the Tiny and Miniature versions.

The Tiny Bernedoodle will grow to be between 12 and 17 inches tall and weigh about 10 to 24 lbs. The Miniature Bernedoodle is typically 18 to 22 ins in height and weighs 25 to 49 lbs.

The Standard Labradoodle isn’t as big as the gigantic Standard Beredoodle but is still fairly large at an average of 22-24 ins tall and weighing 50- 65 lbs. There is no Tiny Labradoodle thanks to proper breeding practices, but the Mini Labradoodle stands only 13 to 17 ins and weighs between 15 to 25 lbs, a perfect size for apartment dwellers.

Bernedoodle vs Labradoodle Coat and Color

The Bernedoodle can have a coat that resembles either parent dog. Since the Bernese Mountain Dog has a thick coat to protect it from cooler temperatures, the Bernedoodle coat is usually thick and curly giving them that popular teddy bear appearance. The coats are low-shedding like the Poodle.

However, some may have straighter coats and shed a little more making them less hypoallergenic. Very curly-coated Bernedoodles will need frequent brushing to prevent matting and tangling, and they will need to be trimmed every few months.

Bernedoodle colors are solid black, black and white, or black and brown. The tri-colored coat with patches of black, brown, and white are the most sought after since they resemble the Bernese Mountain Dog.

Labradoodle coat colors vary more than the Bernedoodle since the parent Lab is a straight, long-haired dog. But most have been bred to resemble the short, curly hair of the Poodle so that they will be lower shedding. They may have black or white coats or inherit designer colors from the Poodle like caramel or parchment blue. They may also have particolored coats that include more than one color.

Temperament, not to be confused with personality is also determined by genetics. A dog’s personality develops over time and depends on how he is treated by his owner.

Since the Bernedoodle has herding and guarding background, they love to perform tasks and please people. They’re easy-going, highly intelligent, and love outdoor adventures. They aren’t big water lovers, but some do swim, mostly thanks to their humans and the environment. They thrive on interaction and don’t do well when left alone for long periods of time.

The Labradoodle is also kind, intelligent, and easy to train. They’re more energetic than a Bernedoodle, and a little more independent. They love the outdoors, and since they are bred from two water lovers, they’re excellent swimmers with their webbed toes. Labradoodles need at least an hour a day of continuous exercise.

Younger Labradoodles will need to play to burn off excess energy. Otherwise, they may develop bad habits like chewing or running away. Exercise them before training so they will focus and learn more quickly.

Bernedoodles and Labradoodle both make excellent companions. They are gentle, fun-loving, and great around other pets and children. The most important factor to consider is living space. Both Standards, especially the Bernedoodle can grow quite large.

Small home and city dwellers should consider the Tiny or Miniature Bernedoodle or the Miniature Labradoodle. Bernadoodles will be the happiest water such as a lake nearby. Dog owners who are busy or work outside the home will have more luck with the Labradoodle.