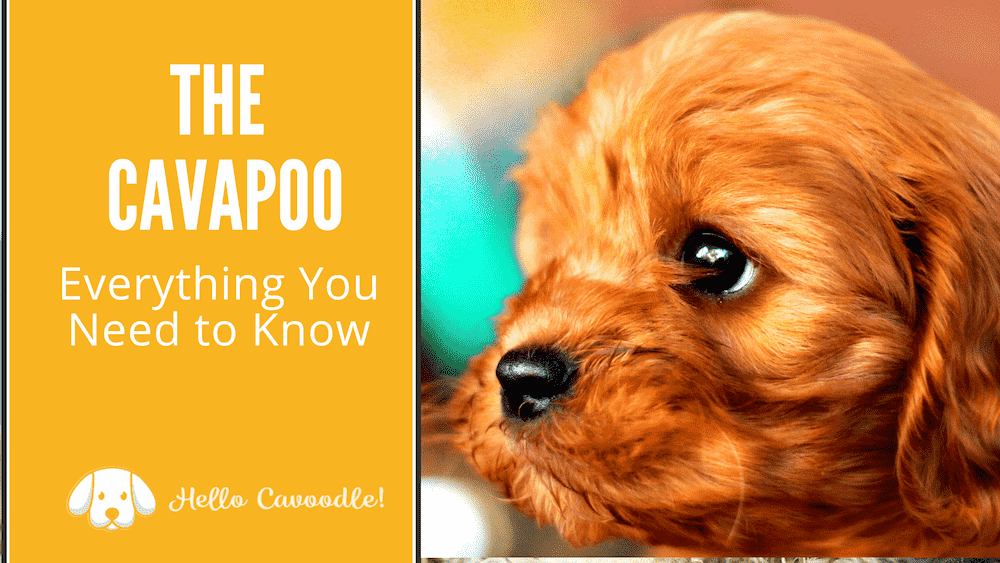 A Cavapoo (also called Cavoodle or Cavadoodle) is a hybrid dog achieved by breeding a Miniature or Toy Poodle and a Cavalier King Charles Spaniel. Known as a designer dog, the result is an adorable and playful dog who loves to cuddle and has some of the best traits of the parent breed.

The Poodle is a favored breed around the world and is often crossed with other breeds to produce “Doodle” dogs. Toy and Miniature Poodles have the same characteristics as a Standard Poodle, just on a smaller scale.

The average height of a Miniature is between 11 and 15 inches from the floor to the shoulder and they weigh between 12 and 20 lbs. The Toy stands less than 11 inches and weighs no more than 16 lbs.

As with most small dogs, their lifespan is a little longer than a Standard Poodle. A Miniature may live up to age 15 while the Toy can live to be as old as 18 years. Health concerns for all Poodles are Addison’s Disease, hip dysplasia, and thyroid disorders.

Like the Standard, Toy and Miniature Poodles are highly intelligent and loyal. They need more attention than some other breeds and don’t do well when left alone for long periods. Their coats are curly and low-shedding in an array of colors from black and white to exotic colors like silver and apricot.

The breed has a connection to royalty. Mary, Queen of Scots took a Toy Spaniel with her to her beheading and King Charles II is said to never have been without one.

Like the Poodle, the Cavalier King Charles Spaniel is intelligent and easy to train. Unlike the Poodle, their coat hair is long and feathered at the chest and tail. Coat colors include red and white, black and tan, and solid mahogany red. Allergies, hip dysplasia, and heart disease are health concerns. They have a life expectancy of 9-14 years. 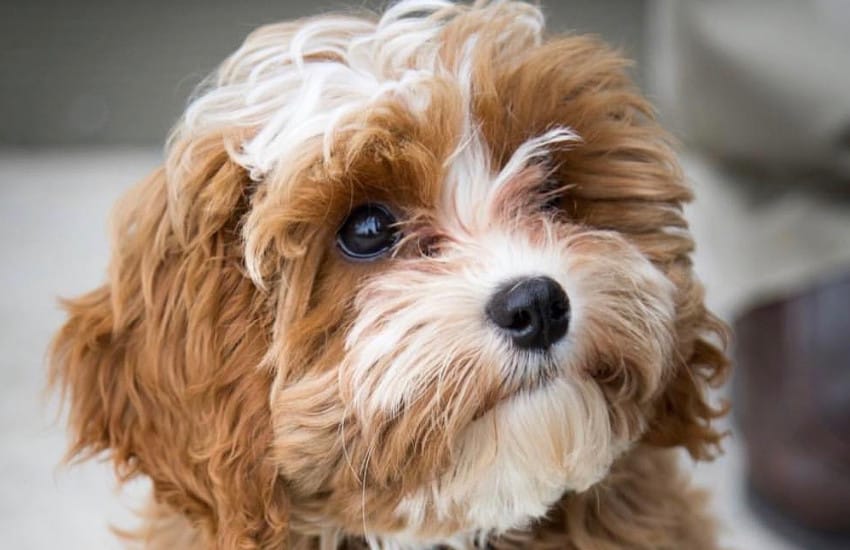 Because they are a hybrid breed, the Cavapoo may favor one or the other parent more or be a unique combination of both. And pups born in the same litter may look entirely different from each other. It’s a relatively small breed standing 12-13 inches tall and weighing 13-18 lbs when fully grown.

The parent breeds will have a lot to do with the size of a Cavapoo. If the Poodle parent was a Miniature, the Cavapoo pup will be a little bigger than if the parent was a Toy Poodle.

The Cavapoo coat texture and color are difficult to predict. It can be short, thick, and curly like the Poodle or longer and silkier like the Spaniel. Color combinations seem almost endless. They can be solid black, brown, silver, white, or chestnut, or brown and white, black and white, or a trio of black, white, and tan.

The best of both parent breeds is evident in the loveable, delightful Cavapoo. The calm, lapdog temperament of the Cavalier Spaniel evens out any hyperness the Poodle may bring to the gene pool. The result is a sociable, loyal pooch. Like the Poodle, the Cavapoo never sees a stranger, yet his first devotion is to the owner.

Read also:  Spoodles - Everything You Need To Know

Despite their calm, laid-back attitude, the Cavapoo shouldn’t be left alone for long periods of time. Without proper physical and mental stimulation, they can develop behavior problems. They like the feeling of belonging to a pack and are happiest around people and other pets. They do well with young children as long as the child doesn’t treat them like a toy.

A hybrid (two breeds) has fewer health problems than a purebred. But Cavapoos do have some health concerns they may have inherited from the parent breed. A common condition to be aware of that’s quite serious is syringomyelia. This condition happens when the skull doesn’t grow big enough for the brain.

Symptoms are whimpering when the head is touched and tenderness around the head, neck, and shoulders. It requires immediate medical attention.

Mitral Valve Disease is fairly common in Cavapoos and shows up at a younger age than in other dogs. MVD begins as a heart murmur and causes heart failure later on. Other health issues to watch for include hip dysplasia and patellar luxation. Both of these are joint and bone disorders that cause pain and lameness. They can be treated with anti-inflammatory medications.

Cavapoos can inherit eye diseases that cause deterioration of the retina. Night blindness will be followed by eventual full blindness. Although there is no cure, they will adapt if their environment stays the same. They may also be prone to epilepsy but treatment is available. 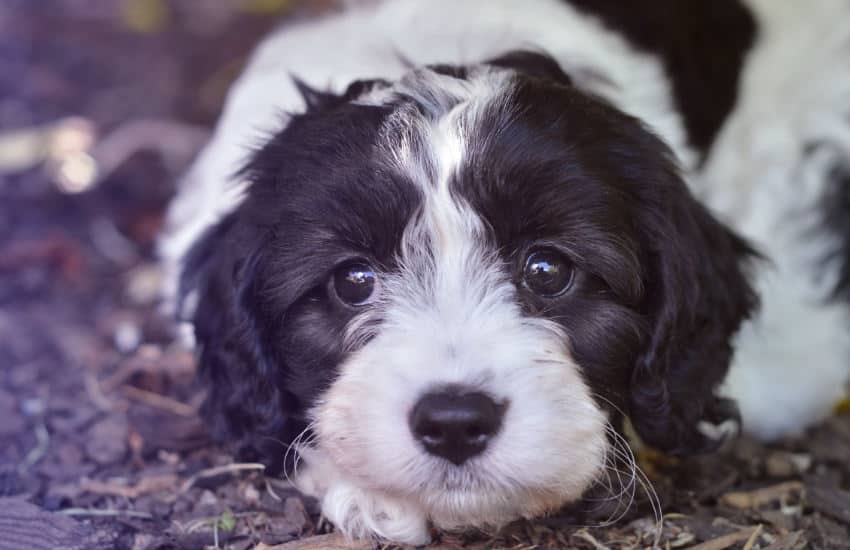 Crossbreeding creates a diverse genetic makeup. The result is less susceptibility to the serious issues and diseases seen in the purebred parent Poodle and Cavalier King Charles Spaniel. Expect an average lifespan of 10-14 years with good care.

Cavapoos are highly adaptable and do well almost anywhere from a city condo to the country. But because the Poodle is athletic and active, a Cavapoo will behave better when given some exercise, despite their couch potato demeanor. Most Cavapoos will be fine with a moderate amount of exercise. Give them at least one 30 minute walk each day.

They will also enjoy tussling with children in the backyard. Cavapoos will harbor a deeply rooted hunting instinct from the Cavalier King Charles Spaniel. Keep them in a fenced-in yard and on a leash when walking. They may take off after catching an interesting scent.

Grooming helps keep the Cavapoo looking its best and also provides a chance for the dog and owner to bond. The coat requires a good bit of attention thanks to the dense, curly hair of the Poodle parent. Use a two-sided pin and bristle brush.

The metal pin side helps with tangles and the brush side smooths out the coat. Brush before and after bathing to de-mat the coat and allow the fur to dry without being frizzy.

Cavapoos have hair inside the ears. Check for knots and bad odors that may come from infected hair follicles or ingrown hairs. Cavapoos are one of those breeds that tend to have tear-stained faces. Wipe his face daily with a soft, damp cloth. Keep the nails clipped; long, overgrown nails can be painful.

Finally, Cavapoos will need regular trimming. Learn to do this with a tutorial or take him to a professional groomer.