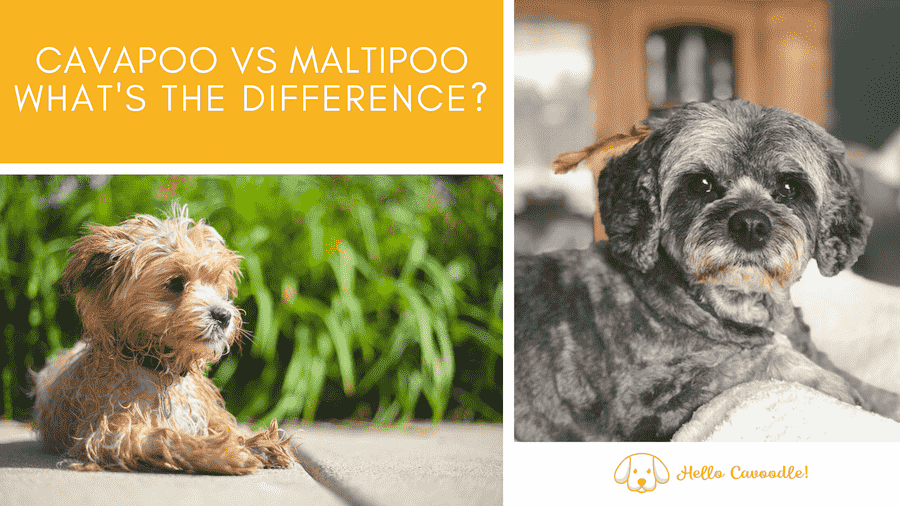 The concept of hybridity means to combine the best qualities of two dog breeds to create a new one. It’s a popular idea and even carries over into the world of objects like automobiles.

But for the purpose of the flora and fauna world, a hybrid dog is a mix of the genetics of two parents. For dog lovers, this means getting the desired results for a mixed breed with the favorite traits of two breeds. These dogs will also be healthier in general. Here, we compare two favorite canine hybrids, the Cavapoo and the Maltipoo.

A Cavapoo (or Cavoodle) is a cross between two breeds: the Cavalier King Charles Spaniel and the popular poodle. The two dog breeds are generally mixed to produce a hypoallergenic pooch that doesn’t shed. The Maltipoo is a cross between fun-loving Maltese dogs and the intelligent Toy or Miniature Poodle. The goal is a small dog that is smart, playful, loving and affectionate.

As with humans, puppies will either exhibit traits from the genes of one parent over the other or a happy mix of both. When it comes to genetics, there is no way to determine which genes will be inherited from each parent. The way that dog owners interact with their canine friends has a lot to do with traits and personality.

When deciding between a Cavapoo and Maltipoo, it’s important to look for a trusted breeder familiar with genetics. An inexperienced or irresponsible one can result in a yappy tyrant that is not easy to train and comes with a host of costly health problems. But with a little luck, you’ll get the intelligence of a poodle and the beauty and even temperament of the Cavalier King Charles Spaniel in a Cavapoo. And with a Maltipoo, you should expect a smart, loyal fun-loving companion.

Designer dog breeders in Australia began breeding the Cavapoo in the late 1990s to achieve a small dog that would be suitable for smaller dwellings. It’s a fairly new cross breed with few rules regarding size. But generally, as a mix between the Cavalier King Charles Spaniel and a Poodle, the Cavapoo will be a small to medium pooch with the actual outcome depending on the size of the parent Poodle. Most will range between nine to 14 inches in height from the floor to the shoulder and weigh between nine and 25 pounds.

The Maltipoo was created by breeders to be a small, hypoallergenic dog for allergy sufferers. The size will depend on whether the Poodle parent was a Toy or Miniature Poodle. The average size of a Maltipoo is between eight to 14 inches and weighs between five and 20 pounds.

Generally, a Maltipoo will be slightly smaller than a Cavapoo dog, but not enough to make a huge difference between the two Doodle breeds.

The Cavapoo’s coat is soft, short, and curly. Coat colors include fawn, cream, gold, chocolate, chestnut, or white. Since they were developed for allergy sufferers, they aren’t big shedders, but they do need a good weekly brushing to be well-groomed.

The Maltipoo is low dander and low-shedding dog breed, which makes this dog breed a good choice for allergy sufferers. Thanks to its long-haired Maltese parent, the Maltipoo coat is medium to long, a little longer than the Cavapoo coat. Colors vary, but most are white, cream, or silver. They need a bath once a month to stay clean and soft.

Cavapoos are affectionate and intelligent mixed breeds. At the same time, they enjoy a little independence. The Maltipoo is also affectionate and loyal to their owners. They’re a bit more sweet-natured than Cavapoo dogs and are happiest by their owner’s side. Both are playful and fun-loving.

Maltipoos are more prone to separation anxiety than Cavapoo dogs. The Maltipoo that is left alone for long periods of time may become destructive. This may manifest itself by resulting in barking, excess chewing, and marking their territory by urinating in inappropriate places.

Both the Cavapoo and Maltipoo have a lot of traits that are similar. Your schedule and setting are the main determiners for the choice between the two. If you have a fenced area outside for your dog, the common white color and longer hair of the Maltipoo may make grooming more time-consuming. But the Cavapoo is quite popular for their playful energy. If you must leave your dog alone during the day, remember that the Maltipoo is more prone to separation anxiety.

Designer dogs like these are harder to find in animal shelters. But if you give a shelter dog a chance, there’s nothing quite like the emotional satisfaction. And most shelters provide background information on the dogs. Try to adopt first.