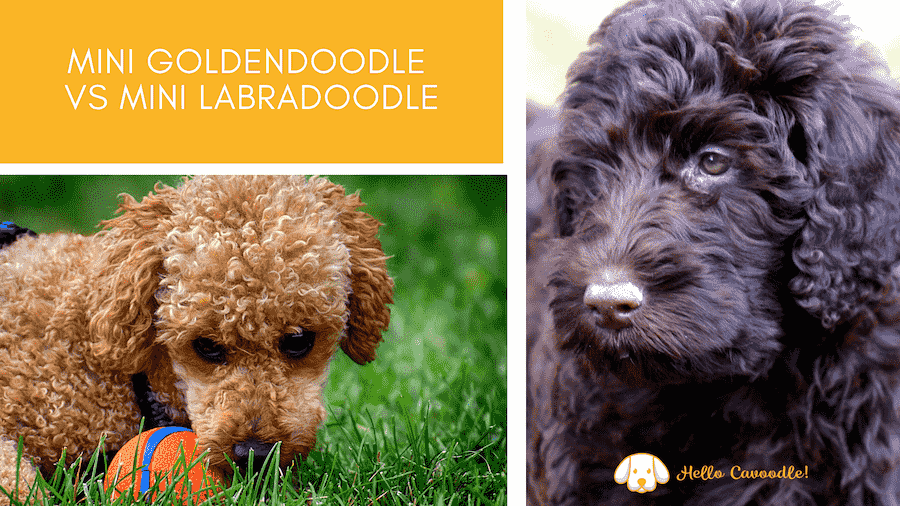 Are you a dog lover who lives in an apartment or small dwelling? Make your next companion a Mini Golden Doodle or Mini Labradoodle. Mini Doodles are the sweetest and most adorable little dogs.

In fact, they’re so popular Hollywood stars who live in huge mansions with plenty of space are clamoring for them.

People often get these dogs confused and think they’re the same. Although they are quite similar in many ways, the Mini Goldendoodle and Mini Labradoodle are two breeds that are quite different. Let’s compare their traits to help you decide which one is right for you.

Poodles, Labs, and Golden Retrievers are all very popular breeds. Poodles are loved for their athletic bodies, high energy level, intelligence, and hypoallergenic coats. Labs have retriever traits and are laidback, loving, and loyal. Hybrid breeding allows these desirable traits from the parent Lab, Golden Retriever, and Poodle to a different dog breed.

Crossing two breeds also results in a healthier dog and a longer lifespan. Generally, smaller dogs live longer than larger ones. Labs and Golden Retrievers have lifespans of 10-12 years. Standard Poodles may live to age 15. Expect your Mini Doodle to live about 15 years or perhaps a little longer.

Both the Goldendoodle and the Mini Labradoodle inherit a low-shedding coat from the Poodle. This makes both a good choice for allergy sufferers. Both will require daily brushing to prevent mats and tangles and regular haircuts to maintain their coats. Depending on personal preference and the climate where you live, both should get clipped 2-4 times a year.

Labradoodles have a more extensive color range than the Goldendoodle. Color depends on genetics. Labradoodles may be any one of the following colors. Many of them come from the Poodle parent.

Goldendoodles come in fewer colors and include golden, brown, reddish, cream, and apricot, and parti.

Labradoodles are more reserved and tend to be more loyal to their “person” while Goldendoodles seem to never meet a stranger.

Both are good-natured and are rarely aggressive. Remember, temperament depends a lot on how a dog is treated. Neither are recommended as guard dogs but both will bark when they feel that their human is being threatened. Labradoodles tend to be a little more protective than Goldendoodles. Neither of them are lap dogs and need regular exercise to avoid behavioral issues.

Since a Goldendoodle is a little more energetic than a Labradoodle, they make great pets for more active people. The Labradoodle needs regular exercise but may be able to do with a little less. Labradoodles will fare better than Goldendoodles when left alone. Both will enjoy retrieving games both on land and water.

It is also always worth considering a reputable breeder over just grabbing whatever miniature Goldendoodle or Labradoodle you see online from backyard breeders. Do your research and help keep the industry on the up and up.

The Labradoodle’s loyalty and dedication to its owner make it a better guide dog or emotional support dog. Goldendoodles are a bit more patient around children. Both are easily trained and make excellent family pets.