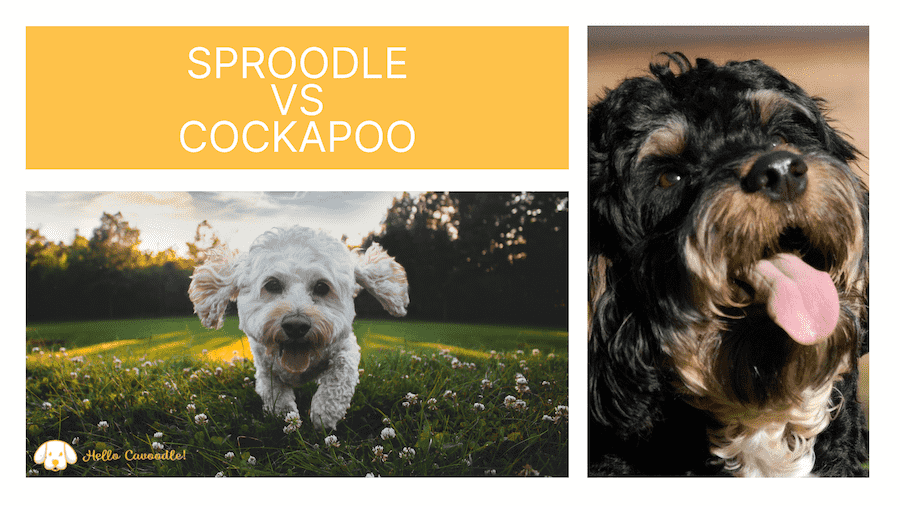 The intelligent, fun-loving Poodle is a popular dog for crossbreeding with other purebred breeds to create an entirely different dog. There are dozens of “Doodle” dogs, all of them having the chance to show off the best of both breeds. The name of the “designer dog” or hybrid breed is usually a clue to the two breeds used. For example, a Goldendoodle is a cross between a Poodle and a Golden Retriever, and a Labradoodle is part Poodle and part Labrador Retriever.

As you would expect, these hybrid dogs all have similarities since they’re a throwback to the Poodle. But like siblings in a family of humans, there are some important differences. If you are considering bringing one of these adorable creatures into your home, it’s important to do your research to ensure you get the best fit for your family.

This article compares the two hybrids called Cockapoo and Sproodle. 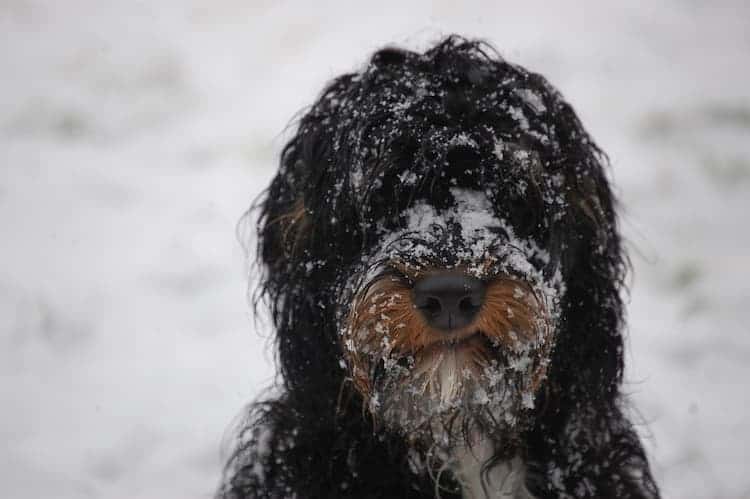 Poodles are often thought of as French, but they’re actually of German origin from the 1800s. They are popular for use in crossbreeding for several reasons. The world’s seventh most-loved dog breed, the Poodle is smart, has a sweet personality, cuddly good looks, and comes in different sizes: Standard, Medium, Toy, and Miniature. Size is important when breeding dogs since a small female would not be able to safely birth a pup if bred with a larger dog.

One of the most desirable traits for using Poodles in crossbreeding is their short, easy-to-care-for hypoallergenic coats. They shed less making them an excellent choice for households with allergy sufferers. In fact, one of the first Doodle dogs, a Labradoodle,  was created in 1989 by an Australian breeder from Guide Dogs Victoria as a guide dog for a blind man with severe allergies.

One important goal in crossbreeding is to create a dog that is healthier and more resistant to genetic disorders and diseases. It helps to understand a little genetics when choosing a hybrid dog. You’ll be better able to tell what your dog will look like, its personality type, health traits, and hypoallergenic degree.

The terminology can get confusing unless you’re a geneticist. Simply put, breeders use the letter P for purebred and the letter F (Filial Hybrid) for crossbred dogs. For example, the F1 generation for a Sproodle is 50% Poodle and 50% Springer Spaniel. Future generations are labeled F2, F3, and so on. The letter B is added to denote backcrossed dogs that are the result of an F1 parent bred back with the purebred (Poodle) dog to intensify the traits of the purebred dog.

This process gets more complicated with each generation. F2 dogs are the result of mating two F1 hybrids,  and F2B is the second generation of backcrossed dogs. The letters can also have multiple Bs Like F2BB. But you don’t have to be an expert geneticist to understand that these throwback dogs can often display traits of the first generation. Again, think humans. 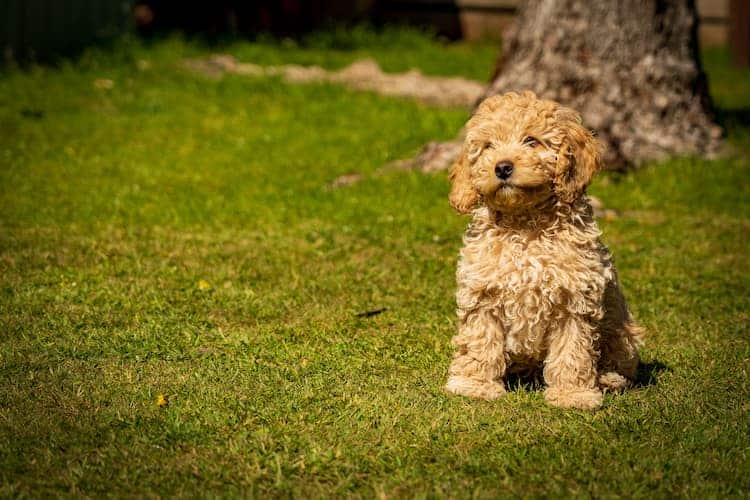 Size, like all other traits, is determined by genetics. Size the Poodle comes in different sizes, it’s an excellent breed to cross with almost any dog.

Sproodles and Cockapoos are similar in size. Since the Springer Spaniel is a little larger than a Cocker Spaniel, it can be bred with a smallish Standard or Miniature Poodle. Much like the parent Poodle, both dogs come in Standard and Miniature. The Cockapoo also comes in Toy, and what is called Teacup. The Teacup Cockapoo breed is achieved by crossing a very small Minature Poodle with a Minature Cockapoo. It takes multiple generations to achieve this breed.

A Miniature Poodle stands under 16 ins and weighs between 20 and 25 lbs. A Minature Cockapoo ranges in height from 11 to 14 inches and weighs 13-18 lbs.

The Toy Cockapoo may reach 10 inches in height and weigh just under 12 lbs. A Teacup Cockapoo weighs less than 6 lbs and stands less than 10 ins in height. 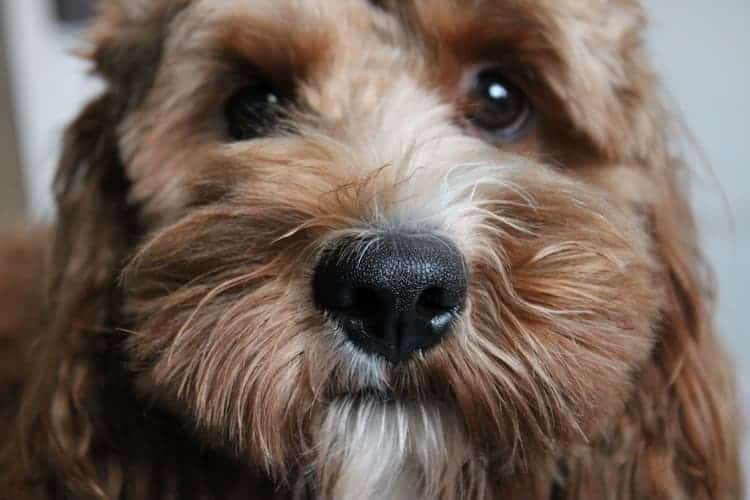 The Sproodle and Cockapoo will both inherit differing characteristics from the parent breed. They will usually have medium to long hair that will be anything from soft and curly to straight and flat. DNA testing is the only way to determine the characteristics they inherit, and even this rarely predicts all coat attributes. Because of the parent dog coat types, it’s like spinning a roulette wheel if you have your heart set on one particular coat type.

It’s important to consider the parent coat types to understand which coat type a Sproodle or Cockapoo will have. The Poodle has a dense, curly coat that sheds within itself. Regular brushing is necessary to detangle the coat and remove the dead hair. Both the Cocker and Springer Spaniel have a double coat. The topcoat is soft, shiny, and waterproof and the undercoat is soft and dense. Both of these coats are shedding types. Maintenance will vary from a thorough weekly brushing to daily brushing and professional grooming at least once a month.

Coat color is somewhat easier to predict. Cocker Spaniels can be either solid or multicolored. The multi coloring includes parti, tri-colored, or roan. The Springer Spaniel coat comes in a variety of colors and combinations. The most common is either white with black or liver markings or black or liver with white markings.

The Poodle coat comes in an array of solid colors from black and white to silver or apricot. Breeding either the Cocker Spaniel or Springer Spaniel with a Poodle will result in differing colors and markings for pups even in the same litter.

Temperament is one of the most important traits in dogs. Luckily, there is no gamble when choosing either breed. That’s because both the parent dogs are incredibly loving and non-aggressive. But both can still make good watchdogs because they have a loyal and protective nature.

Both breeds get along well with children and other pets. They are loving, intelligent, and like to be included in family activities. Since both are descendants of working breeds, they like to train and work for rewards. Teaching them tricks and involving them in problems solving games will keep these pooches stimulated and happy.

Both breeds will need a good bit of exercise. Cockapoos need between one and two hours daily. Sproodles are a little more active. They will need closer to two hours daily. Cockapoos and Sproodles love to run off-leash. Look for off-leash dog parks where they can do so safely. Both love the water and are good swimmers. A camping trip by the lake or beach will be especially exciting for them.

Although it’s the luck of the draw for coat and color, both the Sproodle and Cockapoo are guaranteed to be loving companions with sweet personalities. Thanks to the Poodle parent, you’ll have a good chance of getting a dog with a low-shedding, hypoallergenic coat.

Both breeds, especially the Sproodle, will require a good bit of exercise and are better suited to active families. You should also consider your home environment. Dog owners in apartments and small dwellings should stick to the miniature and toy sizes.

These dogs will be a part of your life for at least a decade. Both breeds can suffer occasionally from inherited health issues including joint dysplasia, epilepsy, cataracts, and dermatitis. Dental disease is especially prevalent in Sproodles while Cockapoos may suffer from pancreatitis and intervertebral disc disorder. Keep them healthy and happy and avoid a lot of heartache with regular health screenings.

Lastly, animal activists encourage you to check local animal shelters for adoption options. All too often, families pay a hefty price for hybrid breeds only to find they don’t have the time for them. Inattention can lead to destructive behaviors. These dogs will make excellent companions in a loving home and bring you much satisfaction and joy.