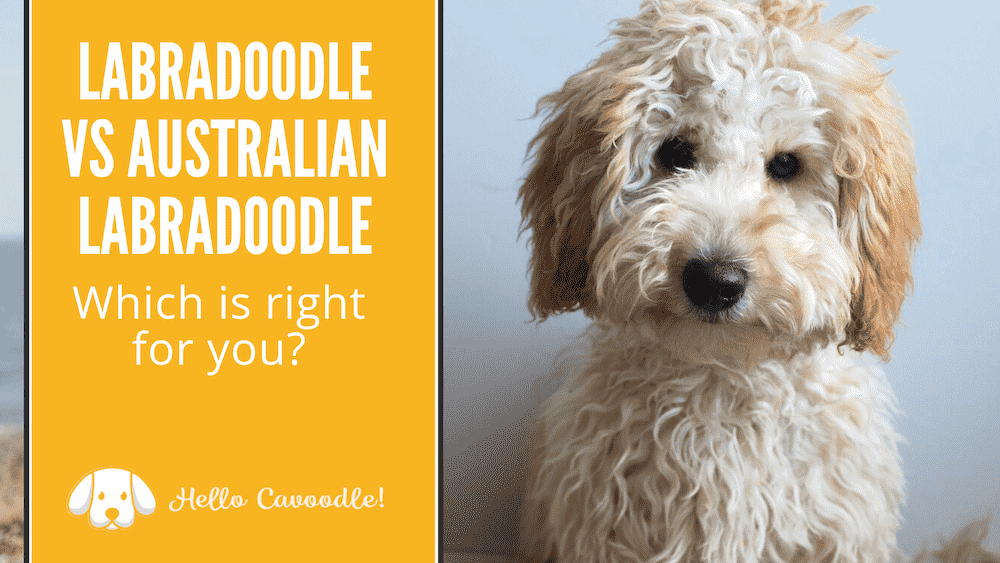 The smart and playful Poodle is a popular breed for creating designer dogs. There are lots of “Doodles” in sizes from miniature to medium and large. One of the most popular is the Labradoodle, a cross between a Labrador Retriever and a Poodle.

The relatively new breed was originally bred by Wally Cocker of Royal National Guide Dogs in Victoria, Australia at the request of a blind woman from Hawaii. Her husband had severe allergies, and she needed a guide dog that was hypoallergenic. Samples of the hair and saliva of 33 Poodles in her state had given him a reaction.

With permission from the manager of the organization, Wally bred a Standard Poodle with one of their Labs. The project was successful, and the first hypoallergenic Labradoodles were born. Today, Labradoodles are bred around the world.

Although the Australian Labradoodle and the Labrador have many similarities, there are some significant differences due to genetics. The first litter of pups born to a purebred Lab and a purebred Poodle is called the F1 generation.

This generation bred with Labradoodles of the same F1 generation produces the F2 generation. The process continues with the next labeled F3, F4, and so on. Not all the breeding lines will be the same. Some of these dogs will be closer to the original Poodle and Lab parents. Like the proverbial box of chocolates, “you never know what you’re gonna get.”

But no matter how high the F-number goes, all will be true Labradoodles. They’re divided into four groups, the Labradoodle, Early Generation Labradoodle, and American or British Labradoodle.

The Australian Labradoodle has an even bigger variety of chocolates in the box. That’s because they’re a mix of the following six different breeds:

Sizes for both the Labradoodle and Australian Labradoodle vary, even within the same litter, and a Standard or Early Generation Poodle can turn out to be quite large. Be aware that they will need more space and exercise than a smaller dog. Fortunately, both are bred in medium and miniature sizes.

Read also:  The Cavoodle vs Cockapoo: What is the Difference?

The Miniature Australian Labradoodle is only slightly shorter at 14 to 16 ins in height. The Minature’s weight averages between 15 and 25 lbs.

Because they are so far down in generations, the Australian Labradoodle’s physical attributes are more consistent and predictable – including their coat type. Every Labradoodle puppy in every litter will be recognizable as an Australian Labradoodle. It’s rare for them to look exactly like one of the six parent breeds.

Since the Australian Labradoodle is several generations away from the shedding Lab, their coats have developed over the years so that they are truly and consistently hypoallergenic.

Both the Labradoodle and Australian Labradoodle come in a wide variety of colors and patterns. The solid colors range from black and white to “designer” colors like apricot and lavender. Parti Doodles have blotches of one color on white, and phantom-colored dogs have a second color above the eyes, on the chest and chin, around the muzzle, and on all four legs and feet.

Rarely, a Labradoodle will be classified as abstract in color characterized by a mix of colors on at least 50 percent white.

The Labradoodle and Australian Labradoodle are both very smart and easy to train. The sociable, outgoing Labradoodle is curious and quite lively, some to the point of being hyperactive. He will be your best hiking and jogging buddy.

Potential dog owners who need a truly non-shedding, hypoallergenic pet will want to choose the Australian Labradoodle. Their calm, stable personality also makes them a good choice around other pets and children.

Those who want a higher-energy and fun-loving outdoor buddy will be happier with the Labradoodle. The Labradoodle also makes a loyal service animal.

Consider your lifestyle and living quarters with regard to size and temperament when choosing a Labradoodle or Australian Labradoodle.