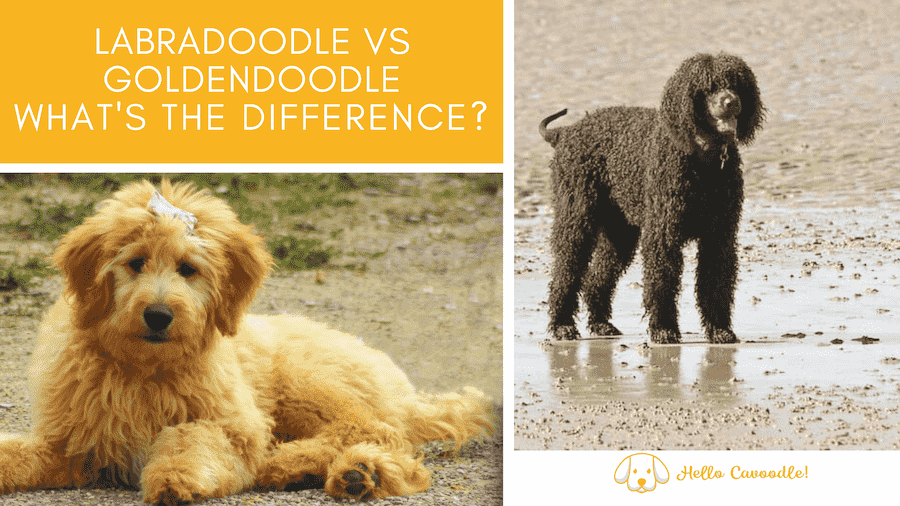 Crossbreeding allows dog breeders to create a dog with the best traits of two breeds. The Poodle, loved for its intelligence and non-shedding, hypoallergenic coat, is a popular dog breed for crossbreeding with other breeds from toy and miniature to larger dogs. Following is a comparison of two popular hybrids, the Labradoodle and the Goldendoodle.

Standards set by the American Kennel Association (AKA) for the Westminster Dog Show and other groups can sadly lead to dogs with inherited health conditions such as hip dysplasia, especially prevalent in larger breeds, heart disease, and even cancer.

As the combined names suggest, Labradoodle dogs will inherit some traits of the Labrador and a Poodle parent while a Goldendoodle is a cross between the Poodle and the Golden Retriever. Before deciding on ownership of one of these hybrid breeds, it’s important to consider the traits of both parent dogs.

Just as humans, these traits aren’t guaranteed to appear in the offspring. But with a little luck, a hybrid dog will have the best traits of both and will certainly be healthier.

Poodles come in three varieties: Toy, Miniature, and Standard. The only genetic difference between the three is size. The origin of the breed is disputed. Some experts claim the Poodle is the descendant of a German water dog while others say it descended from the French Babet, another breed of water dog.

The sweet-natured Labrador Retriever is one of the world’s most popular breeds, especially in the western world. It’s a retrieving-hunting dog first bred in the UK by using fishing dogs imported from Canada. Like the Poodle, they’re great swimmers, so Lab owners can expect a dog that loves the water.

The Golden Retriever, so named for its lustrous golden coat, was first bred in Scotland during the mid-19th century. Wealthy Scots at that time were into waterfowl hunting and needed a retriever that could also fetch fowl from the water.

There is little difference in the size of a Labradoodle and a Goldendoodle. Due to their lineage, each of these two breeds falls within the category of medium-large, larger than most Spaniel breeds and smaller than dogs like the Great Dane, Newfoundland, or Mastiff. The Standard Poodle stands between 15 to 20 ins in height and weighs between 45 and 70 lbs.

Labradors stand a little taller, between 22-24 inches, and weigh between 55-71 lbs. On average, Golden Retrievers are the same or a bit shorter than Poodles with a height of 15 to 20 inches. However, due to the Poodle’s muscle mass, they are usually heavier.

In conclusion, the size of a Labradoodle puppy or Goldendoodle puppy will depend on the parent dogs. In general, the Lab may be shorter and huskier (22-24 inches, 50-65 lbs) than the Goldendoodle (24-28 ins, 30-45 lbs. Females are a little smaller than males.

Both the Labradoodle and the Goldendoodle are low-shedders. The Labradoodle’s coat may be straight, shaggy, or curly. The straight coated ones most resemble the Lab parent and will shed more than shaggy or curly coats. The shaggy coat will be the easiest to maintain and can get by with a weekly bath. The curly-coated Labradoodle sheds the least but one fact is it still needs daily brushing.

Read also:  The Cavoodle vs Cockapoo: What is the Difference?

The Goldendoodle’s coat is wavy, curly, or straight depending on the dominant gene. They may have long facial hair called furnishings and include a mustache, eyebrows, and beard. A dog with furnishings will shed a little more.

Since the Labradoodle is a hybrid dog breed between the Poodle and Lab, their coats come in a plethora of colors. They can also be parti, or multicolored. The Goldendoodle’s coat color is determined by the inherited dominant gene.

The cream, apricot, and red shades come from the Golden Retriever, and the black, silver, chocolate, and gray shades are inherited from the Poodle. They may also be patterned or parti.

Both of these breeds have similar personalities. The Labradoodle inherits its calm and loving affection from the Lab and its outgoing personality and playfulness from the Poodle. These are two of the most intelligent dog breeds, so the Goldendoodle is guaranteed to be a smart pooch.

The Goldendoodle is a little more extroverted while the Labradoodle will be intelligent like a Poodle and laid back like a Lab. As with all breeds, ownership affects temperament. Give them patience and lots of love.

The Mini Labradoodle and Mini Goldendoodle are crossbreeds between the Miniature Poodle and purebred Labrador and Golden Retriever. There is no such breed as a Miniature Golden Retriever; Miniature Labs do exist but aren’t a recognized breed because of questionable breeding practices.

Breeders must take care not to breed a Miniature Poodle female with a Lab or Golden Retriever male. The puppies will likely be too large for her to birth safely.

Like their larger counterparts, both the Mini Lab and Mini Golden are hypoallergenic. These poodle mixes both have short, wiry coats and don’t shed a lot. Their small size makes them great companions for apartment dwellers. Both dogs come in colors similar to the Poodle, such as black, white, apricot, cream, and silver. Unlike the Poodle, they can be two-toned, brindle (flecked), or “parti” meaning patched.

Mini Labradoodle puppies are great family dogs. They are friendly, obedient, and less rambunctious than the very energetic dog, the Mini Goldendoodle. The Mini Golden is smart, playful, and loyal. Because of their lower prey drive, they don’t make good watchdogs.

Both breeds make excellent companions and are good around other pets and children. Labradoodles make better service dogs and Goldendoodles are better therapy dogs. Dog owners who don’t want the hassle of a larger dog but want a little more pooch to cuddle will be happy with both. Those who live in smaller dwellings will do better with the mini versions.